​Some people wonder how our dogs are able to be on beaches or other public places. Are they service dogs or not?

The ADA defines a service animal as a dog that is individually trained to do work or perform tasks for a person with a disability. Since Ricochet is handled by individuals who are disabled, like a veteran with PTSD or a child with autism, and she has been taught tasks to mitigate their disability, she is a service dog when she's being handled by them in a working capacity.

She's a SURFice dog® when she's surfing with people, kids or veterans with disabilities. She is also acting as a service dog to mitigate their disability.

She's a therapy dog when she's representing the organizations that registered and certified her.
​​ 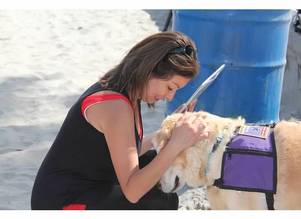 ​The reason our dogs have so many roles is because they've had significant training through our program. Our organization was founded to raise and train service dogs. Our founder, Judy Fridono is the Executive Director and has a degree in assistance dog training from Bergin Institute of Canine Studies. She has also been a certified dog trainer and has attended many canine education seminars.

As such, our dogs are extensively trained as therapy dogs and service dogs for over two years. Ricochet wasn't placed with an individual with a disability because at the time, we didn't really think about psychiatric disabilities. A mistake, for sure because she could have been placed with an able bodied veteran with PTSD. Unfortunately, once we realized how effective she was with this population, she was too old to be placed. But, none-the-less, it turned out better, and she's able to help many individuals instead of just one. When a person with a disability is handling her, and she's providing the specific tasks she was trained to mitigate their disability... she's service dog.

We created a unique role of SURFice dog® for Ricochet. So, she's allowed on beaches and other public places because of her, and Puppy Prodigies service dog credentials. We also abide by the California law that requires service dogs to wear the state issued assistance dog tag.

Ricochet has hundreds and hundreds of hours working with people with disabilities, kids with special needs, wounded warriors and veterans with PTSD. So her experience and expertise is solid. She takes her SURFice job very seriously. You will rarely see her smiling on the surfboard. She feels responsible for whoever is on the board with her. You can get an idea of that through this quick, 20 second slow motion video. You will see that 8 year old West who has autism and Ricochet jumped off the board as it neared shore. Ricochet didn't take her eyes of him until he made eye contact with her. Even though it was just a second of eye contact, he assured her that he was fine, and she was able to run to the beach. 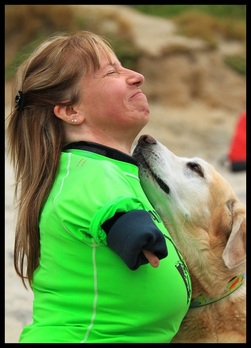 LAWS & LIABILITY
The American’s With Disabilities Act states that only service dogs have public access rights. In the event someone misrepresents their dog as a service dog, the owner could face jail time and/or a $1000 fine. If a dog attends an event where dogs aren’t allowed, there is also the risk of the venue losing permits with the city.

I've been asked if a therapy dog title would cover other dogs who may want to try the work Ricochet does. It would not. Even if  a dog became a therapy dog, the insurance they provide would only cover their venues like hospitals or nursing homes. It would not cover venues that aren’t theirs. Plus therapy dogs don’t have public access rights to be on beaches that don’t allow dogs. It’s unlikely an insurance company would cover a dog in a place where they aren’t allowed.

As far as homeowners insurance, they may cover your dog for things like a fall caused by your dog, but if you are putting others at risk with your dog like surfing does, it would be questionable that they would cover something like that. It's worth a shot at contacting them and explaining in detail just what your dog will be doing, and if they'll cover the liability if something happens.

Our dogs are covered under the insurance of our non-profit and service dog training program. Any time Ricochet surfs, whether it’s with someone who is disabled, a special needs child, or able bodied individuals, our insurance specifically covers her, the participant and our volunteers.

Our dogs have a LOT of training in all aspects of the roles they work in. So have our handlers and volunteers. It's taken many hours and many years of experience and expertise.

We are advocates for legitimate service dogs. There are too many fake service dogs out there right now that are making it bad for everyone. We don't approve of those who impersonate service dogs or try to maneuver the laws. It's best that you don't create legal, safety or ethical problems for anyone, and just follow the rules.

Our dogs are in a very unique position because of our background, our non-profit, the credentials of our entire team and our insurance.