Drs. Scott and Fuller documented critical periods in the development of the canine in 1953.  A critical period is a specific time in the maturation process when a small amount of experience will produce a great effect on later behavior.  It's also a period when learning is easier and knowledge gained is stored in the long term memory.  The difference between the amount of effort needed to produce the same effect at different periods determines just how critical the period is.  There is a window of opportunity in which certain experiences need to happen at a specific time, or the window will close and the potential benefits of those experiences will be lost.

Understanding the critical periods affords an excellent resource in which to shape the character traits of individual puppies so that they can achieve the highest adaptability potential for their future careers.

There are four stages of development which include neonatal, transitional, socialization and
juvenile. There are also sub-periods which are listed below.  These periods are approximations, as all puppies develop according to their individual time-tables. 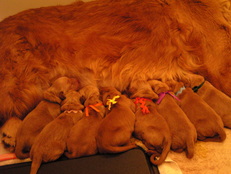 Neonatal Period - Birth to 14 Days
Newborn puppies are born helpless and completely dependent on their dam.  From a sensory viewpoint, the newborn pup is primarily a tactile animal, responding to touch, pain and cold.  Their ears and eyes are closed.   90% of their time is spent sleeping, and the rest is devoted to nursing.  A puppy's general motor activities at this stage are limited to swim like crawling movements.  They cannot regulate their body temperature, nor can they eliminate without their mother's stimulation. Newborn pups show very little activity other than simple patterns of care seeking behavior.  The central nervous system is developing rapidly.

It is well established that during this period, short periods of daily handling and other stimuli can have marked, long term effects on a puppy's behavioral and physical development.  These effects include accelerated maturation of the nervous system, more rapid hair growth, increased weight gain, enhanced development of motor and problem solving skills, and earlier opening of the eyes.  In behavioral terms, puppies exposed to varied stimulation from birth to five weeks were found to be more confident, exploratory and socially adept.

Transition period - 15 to 21 days
This period starts when the eyes open, and ends when the puppy first "startles" on hearing noise.  The transitional period is characterized by significant changes and neurologic development.  The puppy changes from being highly protected from his environment to extremely sensitive to it.  This period is one of transition from neonatal to a more adult like form.  All senses are functioning during this time.

Primary/canine Socialization Period-22 to 49 Days
This is the period where the puppy learns he is a dog.  It is very important that he be kept with his littermates and mother during this time.  Group coordinated activity and social play occur during this stage.  Puppies exhibit playful, aggressive and sexual behaviors between themselves.  The central nervous system continues its rapid development.

Secondary/human Socialization Period 50 to 84 Days (7 to 12 weeks)
The secondary socialization period begins when a puppy leaves his mother and littermates to start his new life which is typically at 49 days.  Although the puppy should have been exposed to people at a much younger age, this is the time when socialization need to continue in earnest.  Puppies should meet as many different types of people as possible during this stage.  It is also important to expose the puppy to as many different environments as possible.

Juvenile period (12 weeks to 6 months)
The period of rapid growth is complete, and the puppy is approximately two-thirds of its adult size.  Compared with the three other stages the juvenile period is one of gradual change, mainly involving the maturing of motor capacities. 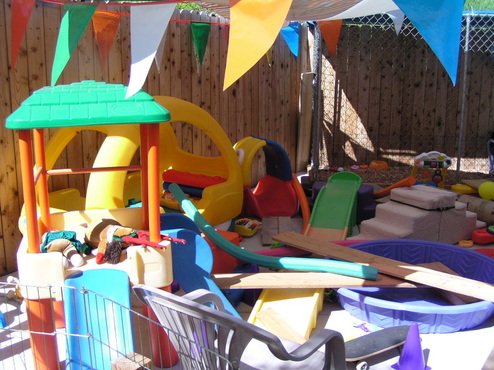 Awareness or identification period (21-28 days)
During this stage, the puppy's eyes and ears have recently opened and he becoming aware of the world around him.  During this time, his environment should remain stable because he is inundated with stimuli.

Curiosity period (5-7 weeks)
The puppies become very curious at this stage.  The type of experiences that the puppy has during this period will have a strong effect on how he will react to humans as an adult.

Behavior refinement period (7-9 weeks)
Researchers have shown that by seven weeks puppies have fully functioning brains based on EEG studies.  Anything they learn during this time is permanent.

Fear imprint period (8 to 10 Weeks)
The puppy is very susceptible to long lasting effects of fearful stimuli at this stage.  If the puppy perceives an event as traumatic, he may generalize it and it could affect him for the rest of his life. Great care should be taken to avoid fearful reactions during this stage.

Environment awareness period (9-12 weeks)
This is the period when exposure to different environments is important.

Seniority Classification Period (12 to 16 Weeks)
This is the period known as the "age of cutting teeth", and the age of independence.  Many behaviorists believe that the end of this period is also the time when the window for effective socialization closes.

Flight Instinct Period (4 to 8 Months)
This period can last for a few days or several weeks.  It's a time when a puppy will "test its wings" and wander further away than before.  It's like a teenager going through puberty as the puppy is changing physiologically.

Second Fear Impact Period (6 to 14 Months)
This period is also called the fear of new situations period.  A well socialized puppy who has been meeting people in an outgoing manner may start to show apprehension or fear toward people and things during this period.  This stage is believed to be related to a cognitive recognition of fear which means they interpret it on an intellectual level in addition to an emotional one.

Maturity period (1-4 years)
Regular socialization should continue through the life of the dog.
​​