We focus on early learning because a puppy’s first seven weeks are a time of tremendous growth and development.  Early learning experiences have profound implications for later success in life.  From birth to seven weeks is the time when the greatest changes, physically and behaviorally take place and a time when basic personality is shaped.  Behavior is never entirely inherited or entirely acquired.  It is developed under the combined, interdependent influences of hereditary and environmental factors.  However, it can be guided and modified by the influence of experience. Therefore it is possible to modify behavior by modifying the environment through early conditioning and training.

BRAIN DEVELOPMENT
Research has shown that in moderation, stress stimulates the brain at the most crucial time in its development.  When a puppy is stimulated during this time, his brain matures faster and he will grow up to have a larger brain with more cells… bigger cells… and more interconnections between them.  Because the puppy’s brain is still in such a formative state, the experiences it undergoes at this early age will have a tremendous impact on the development of his mind.  This is why the first weeks are such a critical period in the pup’s life.  By managing his environment we can therefore influence the final form and structure of his brain.

The results of many behavior studies and EEG measurements demonstrate that 8 week old puppies function at nearly an adult level in terms of learning ability.  However, as puppies mature, the ease with which they learn noticeably begins to decline by about 16 weeks.

Research has also shown that by exercising the brain with mental challenges the total brain function improves, not just one area of it.  Nerve conductivity is improved in both speed and accuracy, recovery time of the neural synapses is shortened as the chemical and electrical signals react faster, and the nerves can fire repeatedly quicker.  The brain mass increases dramatically as nerve cell density increases, and overall brain efficiency improves significantly.  So, with our early intervention, we're actually helping the puppy's brain develop to it's fullest potential.
​
WINDOW OF OPPORTUNITY
The most influential time of a puppy's life is between three and six weeks.  Fear is not present in newborn puppies.  It begins to develop slowly around five weeks of age, and increases gradually until it escalates in the fear imprint period during the eighth week.

Therefore, there is a window of opportunity between three and six weeks of age when anxiety levels in the puppy are the lowest they’ll ever be in their entire life.  Anything the puppy is exposed to between this timeframe will therefore be associated with low anxiety.  It will be permanently ingrained in the central nervous system and forever remembered as something that is pleasant or neutral because happening when it does it is interpreted as a non fearful, non anxiety evoking object or experience.  This is the time we look at the possibilities of what the puppy may encounter later in life and ensure he is incrementally exposed to the stimuli during this timeframe.

Because experiences are permanently ingrained during this time, we also work with puppies to develop their problem-solving abilities, mental agility and mental coordination.  It's a perfect time to begin their assistance dog training too!
​ 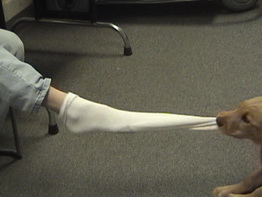 ​SCIENTIFIC STUDIES
Scientific studies have established that various types of stimuli can have marked, long-term effects on the behavioral and physical development of some mammalian neonates including puppies.  These effects include accelerated maturation of the nervous system, more rapid hair growth, and weight gain, enhanced development of motor and problem solving skills, and earlier opening of the eyes.  In behavioral terms, canine neonates exposed to varied stimulation from birth to five weeks of age were found to be more confident, exploratory and socially adept when tested later in strange situations than un-stimulated control groups.

Researchers have discovered that in order for puppies to develop confidence, trust and a positive approach to learning, they require certain types of handling and experiences during specific times in their early development.  By giving a puppy this upbringing he will be more capable of interacting normally with his surroundings and will have an increased capacity to learn.
CONCLUSION
Since a puppy has the brain of an adult dog at seven weeks of age we take advantage of this developmental stage through our Early Learning Program, which produces dogs that become puppy prodigies!
​
​"A good beginning makes a good ending"
English proverb 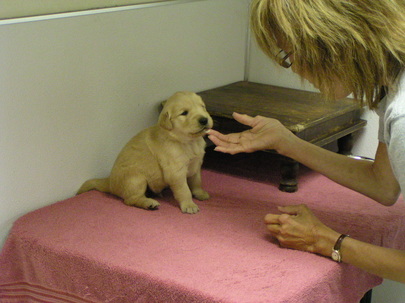 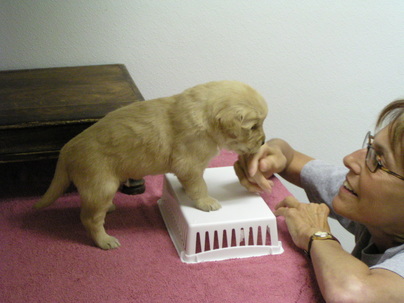 3 week old service dog puppy learning to do an "up"